Book review: The End of Policing by Alex Vitale 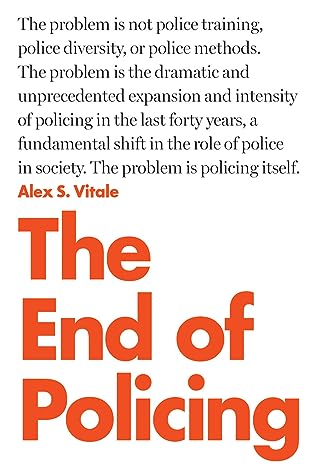 The End of Policing by Alex S. Vitale
My rating: 4 of 5 stars

Imagine addressing the causes of crime rather than sending in heavily armed punishers.

Alex Vitale attempts to make the argument for The End of Policing. He covers the major activities of US policing and how these activities are largely ineffective and don’t address the causes of crime. Vitale also argues the actual role of the police is as the enforcers of the state/power/status quo and how this ties to inequality, poverty, racism, and bigotry.

I became interested in alternatives to policing after seeing cops abusing their power. One example sticks in my memory and drove me to read more on the subject. Several years ago a viral video showed 4 cops physically restraining a 12-year-old boy they claimed was autistic, because he “didn’t understand”, not like us normies… At the time my immediate response was of disgust. Four grown men pinning down a kid with autism in exactly the way that would cause someone with autism to have a meltdown was inexcusable. It showed they were the wrong people for the job, as they’d expressed some level of awareness about autism. That it was just a fabrication to excuse their assault, much like the later defences of their actions, showed a callous disregard for the values they are meant to abide by.

Prior to reading this book, I was surprised to learn that the common excuse for this overuse of force, that being a cop is dangerous, wasn’t true. The profession doesn’t rank in the Top 10 in any global north country (unless I’ve missed one). In Australia, the most dangerous thing a cop does is drive. Can’t think of any other people that drive anywhere. For the USA, which this book is primarily about, even the presence of enough guns to pay for every S&W executive’s private jet doesn’t make their job riskier than garbage collectors or taxi drivers. That’s not to say the job isn’t without risk, but the big dangers are suicide and the aforementioned driving.

All this is to say that I went into Vitale’s book expecting to receive a bit more insight into the problems with cops and why we need to move away from the policing model. That is what this book delivered. Where it lacked slightly was in transition ideas and alternatives. While there were plenty of alternatives mentioned, how to transition, how to address structural changes, etc., was a bit underdone. In fairness on this point, that would essentially be a whole other book of material and probably needs to be the follow-up.

The End of Policing will probably be pretty controversial to some people. As I’ve tried to explain above, I was already aware of how flat many of the usual pro-policing arguments fall. So I’d encourage people to read this book carefully, do the lateral reading, and see why this argument is solid and worth pursuing.

Comments while reading:
“Part of the problem is that our politicians, media, and criminal justice institutions too often equate justice with revenge.”

Yes. I’ve had this argument with people before. There are two problems, the first being revenge, the second being that people assume blast or dust.

Understandably, people don’t like it when bad things happen to them, so there is this idea of an eye for an eye – or more accurately a life for an eye. We perpetuate that idea in our media and the way we discuss justice, despite the hard fact that it only makes things worse.

The blast or dust problem is a hurdle for a lot of people on justice. I’ve had an argument with people who were justifying straight-up murdering someone for attempting to steal their TV. When I suggested that the death penalty doesn’t apply to petty theft, the response was to assert that I was being soft and that I might as well just give my TV away. There are no potential alternatives to not murdering people to these “justice” warriors – vengeance/revenge is the only answer. Yet I have personally intervened and stopped robberies just by having a chat with someone in a non-confrontational way. Realising that you can address crime without needing to punish someone is very important to advancing our society.

Had to lol. French saying: French people are free to do anything they like, with police supervision.

“Modern policing is largely a war on the poor that does little to make people safer or communities stronger, and even when it does, this is accomplished through the most coercive forms of state power that destroy the lives of millions. Instead of asking the police to solve our problems we must organize for real justice. We need to produce a society designed to meet people’s human needs, rather than wallow in the pursuit of wealth at the expense of all else.”

When you understand how crime arises in society you realise the police aren’t about stopping crime, they are barely about catching “bad guys”. In fact, they’d have little point for existing if we addressed the root causes of crime in our society.

On that point, fun fact, the biggest measure done to address crime was the environmental regulation of lead, which accounted for 56% of the decline in violent crime in the 1990s. Access to legal and safe abortions was the next biggest factor in decreasing violent crime at 29% of the decline. https://www.nber.org/papers/w13097

“The reality is that the police exist primarily as a system for managing and even producing inequality by suppressing social movements and tightly managing the behaviours of poor and nonwhite people: those on the losing end of economic and political arrangements.”

Seeing the police come out against climate change protesters in the past few years really cements this point.

“Reducing social services and replacing them with punitive social control mechanisms works less well and is more expensive. The cost of housing people and providing then with mental health services is actually lower than cycling them through emergency rooms, homeless shelters, and jails, as numerous studies have shown.”

This point is one that so many either can’t wrap their heads around or refuse to engage with. See my point above about an eye for an eye mentality.

And doesn’t address the poverty to alleviate crime.

2 thoughts on “Book review: The End of Policing by Alex Vitale”