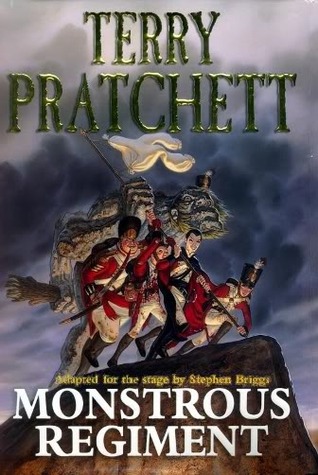 Monstrous Regiment by Terry Pratchett
My rating: 5 of 5 stars

Polly Perks joins the army disguised as a boy to find her brother and is assigned to one of the last regiments being sent to fight a losing war. She befriends her fellow soldiers and the legendary Sergeant Jackrum. But interest in this plucky band of warriors is growing as they look set to turn the tide of war. Especially after Polly kicked the wrong person’s sock drawer.

This Discworld novel has been near the top of my TBR for a while now and recently got a shove to the top. I’d say it is in the peak Pratchett period, with the story, satire, nuance and humour at their best.

The reason Monstrous Regiment got the shove to the top was after some media debating whether Sir Terry would have been for or against trans people being allowed to be people. Some were arguing that his pro-women views obviously meant he would have been a TERF (an overly polite term for transphobes). Others, generally those who knew him better, argued his books were littered with support for all peoples being treated well.

The entire plot of Monstrous Regiment can be read as support of not just feminism but LGBTQI+ rights in general. Although, as a man, I’d like to think we men have more to offer than just some particularly good burping and socks in the right places. Like the ability to reach higher shelves and open tight jars!

Anyway, this was a great novel and a wonderful example of how Sir Terry wanted us to accept all people as people. With plenty of laughs along the way.