Firefight by Brandon Sanderson
My rating: 4 of 5 stars

Ever wonder what Waterworld would have been like with supervillains in it? Yeah, me neither.

In the second instalment of The Reckoners, David Charleston has become Steelslayer: killer of Epics. Which means that Newcago, whilst freed from tyranny, has regular visits from Epics intent on killing Steelslayer. The Reckoners discover that the ruler of Babilar (Manhattan) has been sending these assassins, so they go to confront Regalia, an Epic from Prof’s past. Because that will end well.

Firefight is an interesting sequel to Steelheart in that the first book was about revenge, whilst this novel was about trying to understand your enemy. In fact, it even flirts with the idea that evil can’t be addressed with killing but instead requires compassion. Pretty heady stuff for a YA novel. Don’t worry, there are fights, guns, and even some swords in the story too.*

This was an enjoyable read. If anything it had more humorous similes (or is that metaphors?) that were such a welcome feature of the protagonist’s narration. I’m looking forward to finishing the series with book three: Calamity.

*Can’t sneak the moral indoctrination in without a bit of violence to hide it.

Steelheart by Brandon Sanderson
My rating: 4 of 5 stars

I wouldn’t make much of a supervillain. My weakness is chocolate. And quality whiskey. And a beautiful guitar. And a great novel. And…. this would make a long list of things to kill me with.

Steelheart is the first book in the Reckoners series by Brandon Sanderson. David was only a child when the Epics (supervillains) appeared. He also has a secret: he saw the greatest of the Epics bleed. The supposedly invincible and invulnerable Steelheart is now the Dictator of Newcago and David wants to avenge his father’s death at the hands of Steelheart.

After enjoying the Mistborn series I have been trying other Sanderson book series, expecting more great novels from him. I struck out with The Way of Kings, which could best be described as using 100 words when 10 would suffice, but Steelheart promises an exciting series.

Leaving aside the (acknowledged) improbable superpowers and raised middle finger to physics, the novel manages to be engaging and intriguing. In this David versus Goliaths tale there is plenty of suspense and fear that the heroes may not triumph. The series is intended as a Young Adult adventure, but YA is the new A must read, so don’t be put off by that.

Can’t wait to read the rest of the series and see how the handwavium works. 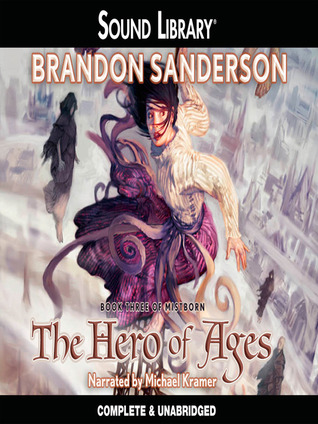