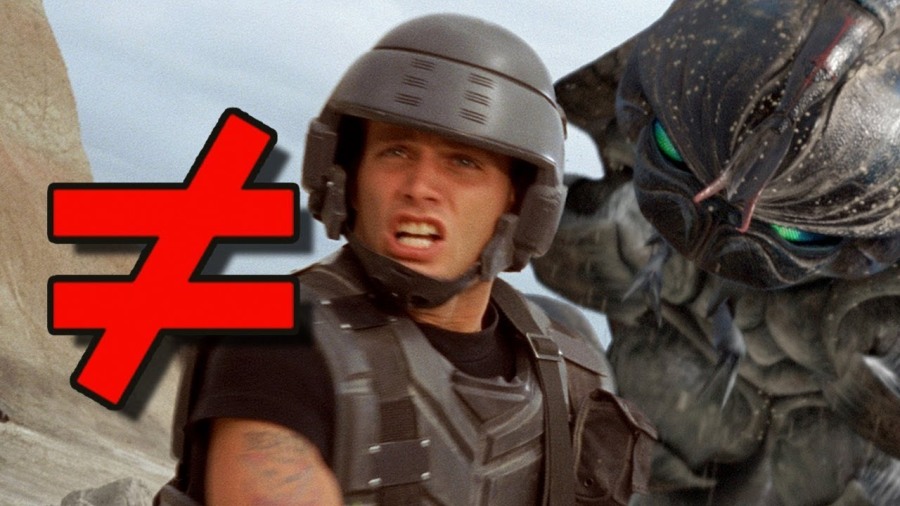 This month’s What’s the Difference? from Cinefix looks at one of the more blatantly different book adaptations: Verhoeven vs Heinlein’s Starship Troopers.

The first time I watched Starship Troopers all I saw was a cheesy B-grade action movie. This was also what many movie reviewers thought at the time. Many years later I finally read the book and it clicked.

Verhoeven’s film only made sense to me after I’d read the book as it is as much a critique of the material as it is an adaptation.

“I stopped after two chapters because it was so boring,” says Verhoeven of his attempts to read Heinlein’s opus. “It is really quite a bad book. I asked Ed Neumeier to tell me the story because I just couldn’t read the thing. It’s a very right-wing book. And with the movie we tried, and I think at least partially succeeded, in commenting on that at the same time. It would be eat your cake and have it. All the way through we were fighting with the fascism, the ultra-militarism. All the way through I wanted the audience to be asking, ‘Are these people crazy?’ Source

The cheesy propaganda segments riff on the heavy-handed philosophical lecturing Heinlein does. The proud militarism is given consequence by utilising Heinlein’s own references to disabled veterans and by showing horrible training injuries and battlefield scenes. The fascist elements are played up for farce in the uniforms and sequences mirroring actual Nazi propaganda films.

Michael Ironside asked, “Why are you doing a right-wing fascist movie?”
Verhoeven replied, “If I tell the world that a right-wing, fascist way of doing things doesn’t work, no one will listen to me. So I’m going to make a perfect fascist world: everyone is beautiful, everything is shiny, everything has big guns and fancy ships, but it’s only good for killing fucking Bugs!” Source

Now, I did actually enjoy the book. It is very interesting and many of the ideas were challengingly different. The portrayal of future warfare was, at the time, as imaginative as I’d come across. So Verhoeven’s reaction to satirise the book – one that Heinlein dashed out as an angry response to the US stopping nuclear tests – was probably overwrought by his childhood in the Nazi-occupied Netherlands. But if the movie adaptation had been faithful we’d probably have seen the worst elements of Heinlein’s ideas paraded around like something produced by the Ministry of Enlightenment.

Well, either that or a schlocky B-grade action movie about the military killing alien bugs.

Update: Here’s another take on the movie that, whilst missing Verhoeven’s critique, shows how much imagery and rhetoric is utilised. Although, it makes a good point that Verhoeven may have missed the mark a little in his critique.

5 thoughts on “Book vs Movie: Starship Troopers – What’s the Difference?”