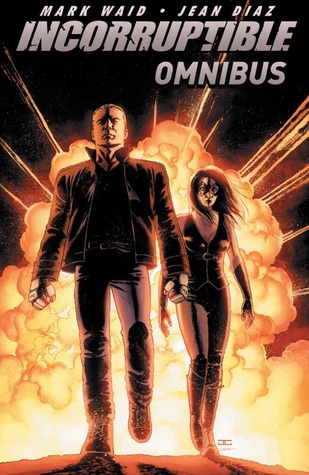 Lifetime villains just don’t know the recipe for being good.

Max Damage was at ground zero the day the Plutonian went berserk. But Max knew it was coming, he’s known the Plutonian’s secret since the day he was sent down the path of criminality. Now with his own superpowers, he realises that if the world’s greatest hero has switched sides, he has to become a hero. It was never going to be that simple though.

Incorruptible is the companion series to Mark Waid’s fantastic Irredeemable. When I originally read both series in 2011-12, I thought they were both very comparable, but that I enjoyed Max’s story more. Now upon re-reading, I’ve switched sides.

The story for Incorruptible deals with more of the consequences to the world after Superman/Plutonian turns villain. The redemption of such a despicable and immoral character is much more interesting than good guy turns bad. But where Irredeemable looks at the repercussions on multiple characters, Incorruptible mostly focuses on Max. This would be fine if Max was actually the protagonist. Unfortunately, Max is merely along for the ride, with major plot points and decisions taken away from him by the events in Irredeemable.

So if you are going to read Incorruptible, do so at the same time as Irredeemable.