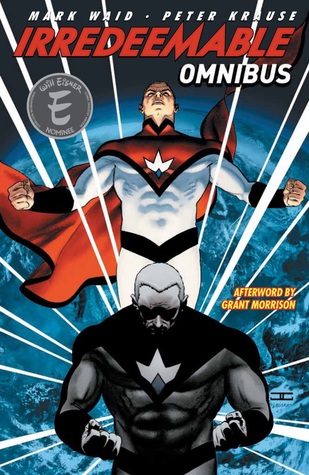 “Why does everyone treat me like I’m a bomb about to go off?” He shouts unironically.

Irredeemable asks the question: What if Superman became evil? We watch the fall of the world’s greatest superhero, the Plutonian, how his friends and fellow superheroes attempt to find a way to stop his rampage while dealing with their own problems of betrayal and hopelessness. And being a superhero comic, there are alternate dimensions, aliens, supervillains, myths become real, and the spirit realm for good measure.

I originally read this and the companion series Incorruptible in 2011-12, toward the end of their run. It was also one of the first comic series I bought in e-format. Originally, I found this take on superheroes to be far more interesting and rewarding than the sort of stories we usually see. The old Spiderman quote, “With great power comes great responsibility”* butts heads with “Absolute power corrupts absolutely” in this story to great effect.

Whenever I think of superheroes, I always think of this series.** Re-reading the series in one sitting made me appreciate more of the story. During my first read through, I thought segments of the series in the run-up to the final arc got bogged down in their own intricacy and lack of relevance to the main story. But this time, I appreciate their inclusion more, even if it did slow the pacing a bit.

If you like superhero stories, then this will probably be a refreshing shot in the arm.

* Although, this quote predates Spiderman by a couple of hundred years.

One thought on “Book review: Irredeemable Volume 1 & 2 by Mark Waid”