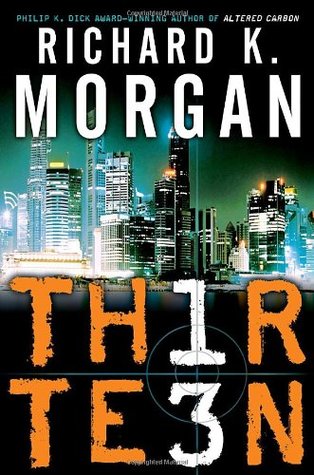 When society stops being violent someone will try to genetically re-engineer violence.

Carl Marsalis is a specialist bounty hunter. Genetically engineered and indoctrinated from birth to be a dangerous weapon, he now hunts others like him. After landing in prison in the wrong part of the former USA – Jesusland – he is seconded to track down someone who is killing his way across the former USA after eating his way through the crew of a Mars-to-Earth flight. But the cannibal seems to be a step ahead of the game and not picking targets at random. It’s as though he has help and is possibly working for someone as their hitman.

After recently finishing the Altered Carbon series, I decided to see what other Morgan novels I could get my hands on. Thirteen promised to be similar to Altered Carbon. The setting was similarly cyber-punk, the mystery/detective narrative is front and centre, and Marsalis likes to get violent and have sex with any and all female characters.

But where Altered Carbon used those elements in a compelling way, Thirteen was too indulgent with them. The novel feels padded out and runs far too long. This leads to pacing problems, with some sections really bogging down. The charisma of Kovacs is not present in Marsalis, despite their similarities, so you don’t feel the same thrill from him dispatching a bad guy or having the love interest* throw herself at him.

I think I could have forgiven those aspects a bit more if it weren’t for the “conversations” between characters about genetics. These were long discussions that bashed the reader with the point. I’d have had less of a problem with them if they weren’t quite so wrong on the science. The “conversations” amounted to telling us that we are essentially only our genetics. That’s not only nonsense (GxExM is how we discuss genetics in science) but is pretty much spouting modern-day scientific racism.**

That point is particularly ironic given the obvious analogies for racism and backward thinking being drawn. “Look at how backward these religious bigots are. Look at how badly they treat black people. Hey, check out my thinly veiled racism disguised as science!” I don’t know if I missed something, but this really did read to me as admonishing racism whilst justifying it as not something we can get over. If that was Morgan’s point, then it would have been great if he could have done it in about 150 pages less.

With all that said, this was still enjoyable and I am looking forward to reading more from Morgan.

* I’m being overly flippant and critical here. Sevgi Ertekin is a fairly well-developed character but her role does appear to be just the love interest and character motivation.

** Yes, scientific racism is back. Modern-day phrenology comes in many forms. Often it is IQ studies and hereditarianism, sometimes it is labelled Human Biodiversity (HBD), other times it will be straight up eugenicists and white nationalists. Reading about its insidious creep into academia and mainstream discourse is sickening.