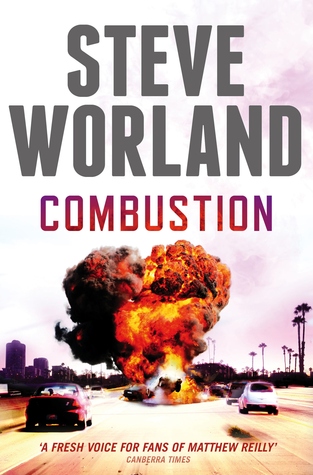 Normally it’s only supercars that explode into flames.*

Judd Bell and his partner are busy training for a mission to Mars, while Corey Purchase is touring the USA with his dog. Both are in LA for a meeting about a movie based on their last adventure when an eco-terrorist releases an aerial toxin that destroys combustion engines. In the city that loves cars as much as it does traffic jams, this results in devastation. Can Judd and Corey rise to the challenge once more and save the day? Will it make for a good sequel?

I’ve had Combustion sitting on my shelf since its release. I’d enjoyed the first novel in the series, Velocity, but had not gotten around to Worland’s other books. Seven years later and I can’t remember much of Velocity, but enough that I knew Combustion would be a fun thriller in the mould of Matthew Reilly or Andy McDermott. And I think that sums it up. Combustion could be described as Reilly-lite. Everything explodes, everyone has to do a lot of running for their lives, and someone is always in imminent danger. Good fun!

My only minor gripe with the book is the eco-terrorist villain. It is something we’ve seen a fair bit of in fiction, the villain who is trying to save the planet from humanity’s excesses. Whether it be using mobile phones to trigger a killing spree, a Titan wanting to erase half like a divorce court attorney, or the temporary king of the seas throwing all the garbage back on land, the eco-terrorist always feels like a stupid choice for a villain. Hey, let’s have the bad-guy be trying to do something good but in a really dumb way! I’d have less of a problem with the idea if it actually resulted in a change from the protagonists who fix the problem in a good way instead.

Interestingly, Worland only appears to have published three books (not including two adaptations of screenplays). So I’m guessing the next Bell and Purchase novel might not end well for the heroes. I might check it out at some point.

* Seriously, this list is made up of mostly high-end sports cars that seem to spend half their time catching fire.