Book review: The Mismeasure of Man by Stephen Jay Gould 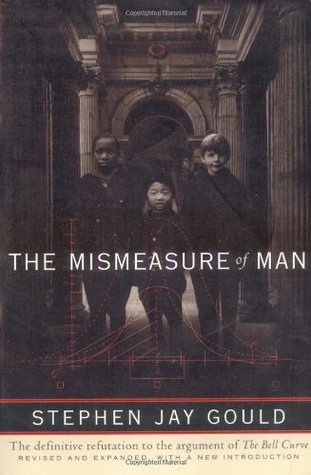 The Mismeasure of Man by Stephen Jay Gould

IQ tests are very good predictors of how well you will do on IQ tests.

This revised edition of The Mismeasure of Man tackles the field of hereditarianism and its related attempts at justifying hierarchical social structures. Or put another way, it explores the stinking swamp of race science with hopes of getting people to notice the stench.

I’ve not previously delved into the history of race science and hereditarianism. I was aware that it was a thing, that it keeps raising its ugly head every few years (Human Biodiversity – HBD – is a recent version you may have heard of), and that it pollutes an entire corner of psychology. As such, this book was enlightening and also disheartening. It reinforced just how a priori the entire field is and why it will continue to be popular.

The first time I became aware that IQ testing wasn’t actually doing what the marketing claims would have you believe was in high school. My brother was very intent on “raising his IQ” by studying for IQ tests. Well you might ask, how can you improve your test score on something that is meant to measure something innate? Over the years I’ve read several papers discussing factors that impact test scores (stress, hunger, nutrition levels, tiredness, sleep deprivation, etc) and realised that these intelligence tests aren’t measuring what some would claim. And worse, often the results are interpreted in almost exactly the opposite way to what they should be (i.e. a poor test result is probably more an indicator of some discriminatory factor, like attending an underfunded school, than of being stupid).

So it is well worth reading this book to understand how fraught this field is with literal white supremacists and eugenicists (see my comments below). It isn’t an easy read but is relatively accessible to most people who give it the time required.

Lay articles:
Charles Murray is once again peddling junk science about race and IQ: Podcaster and author Sam Harris is the latest to fall for it.
Sam Harris, Charles Murray, and the allure of race science: This is not “forbidden knowledge.” It is America’s most ancient justification for bigotry and racial inequality.

Have just gotten to the bit about G and Factor Analysis. I’m passingly familiar with principal components analysis, a technique similar in some ways to Factor Analysis, and largely agree with what Gould is saying. It is very easy to not understand what the principal components are actually showing you, let alone what that correlation means. The first thing you learn in statistics is that correlation doesn’t equal causation and something about storks bringing babies.

I decided to do a quick bit of lateral reading to find some more on G and Factor Analysis. I didn’t get past the former’s Wikipedia page. Just about every reference was from a known white supremacist (Jensen* being particularly prominent as a primary source). Makes it a tad hard to take the field seriously, and hard to find decent research when a jumping-off point like Wikipedia is swamped in BS.

Another of the people referenced is Richard Lynn (a white supremacist). He and his protege, Emil Kirkegaard (a eugenicist and all-round nasty POS), run a bunch of pseudojournals and a fake research group (Ulster Institute for Social Research) that is all basically a front for white supremacist money to generate pseudoscience. Fun fact: Kirkegaard’s most cited paper has pretty much only been cited by him, fifty-nine times. Thankfully the mainstream doesn’t take these guys seriously anymore, but they have tendrils, as can be seen by Lynn (and other white supremacists) being referenced on the Wikipedia pages.

* Quick note on Arthur Jensen, his Wikipedia bio is much like the G Factor page. It is deliberately misleading and rubbish. You would be forgiven for thinking that Jensen was something other than a white nationalist, avid racist, and in the employ of said same. His funding was barely mentioned in the bio, and he has a whole page on the Southern Poverty Law Centre that doesn’t even get a mention.

Arthur Jensen was arguably the father of modern academic racism. For over 40 years, Jensen, an educational psychologist at the University of California, Berkeley, provided a patina of academic respectability to pseudoscientific theories of black inferiority and segregationist public policies. Jensen was responsible for resurrecting the idea that the black population is inherently and immutably less intelligent than the white population, an ideology that immediately became known as “jensenism.”

One thought on “Book review: The Mismeasure of Man by Stephen Jay Gould”