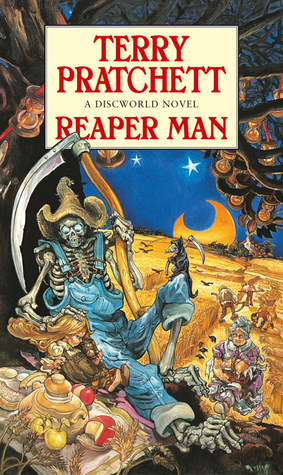 “I AM NOT SURE THERE IS SUCH A THING AS RIGHT. OR WRONG. JUST PLACES TO STAND.”

The Auditors of Reality have had enough of Death. His fledgling personality doesn’t seem right to them. So they contact Death’s boss, Azrael, who decides to give death to Death. This seems like a wonderful chance for Death, who takes a job as the farmhand Bill Door. But The Auditors, being the obviously efficient types, have failed to have a succession plan and haven’t hired the new Death. This creates some interesting problems for the recently deceased residents of the Disc.

When I picked up Reaper Man, my exact thoughts were “I don’t think I’ve read a Pratchett book for at least a couple of months, must be time for another one.” I’m gradually working my way through all the Discworld novels with an emphasis on the ones involving Death and The Watch. The City Watch books often tend to have a more solid plot, whereas the Death novels can feel a bit more ambivalent about plots.

Reaper Man did have a solid plot, but it felt more like a series of pins being used to hang worldbuilding and character development on. If that sounds like a criticism, it isn’t. More an observation that could be applied to most Discworld novels. I mention it here because the character arc ends after the plot, which can mess with some people’s appreciation of stories.*

I’m looking forward to my next Discworld adventure soon.

This short animated pilot is based upon Reaper Man:

* This is pretty much what people are complaining about when they say that The Lord of the Rings movies have too many endings. The plots are tied up long before the character arcs are.