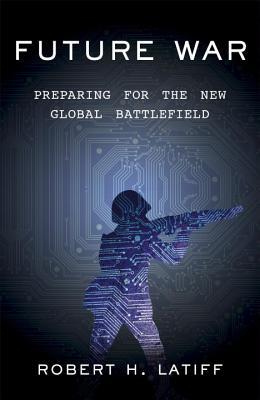 Future War: Preparing for the New Global Battlefield by Robert H. Latiff
My rating: 3 of 5 stars

USA: Hello Mr Scientist, can you make me an even more horrifying way to kill people?
Scientist: Sure. But it might not be a good idea.
USA: We’ll worry about that later. Here’s some money.
Scientist: I’ll get started.

Retired Major General Dr Robert Latiff spent much of his career looking at the cutting edge of military technology. As both a scientist and an officer, he knows what is already being developed to wage war, and is well placed to speculate about the future of war. He doesn’t just want to let us in on what war will look like, he wants us all to help ethically shape the future of war.

This book was both fascinating and deeply annoying to read. I think my biggest problem with Future War was that, for someone wanting to talk about war ethics, Latiff selectively presents the military, political leaders, and history so as to feel deliberately obfuscatory. Now, this is probably about Latiff being a retired Airforce Major General and thus his bias is showing. But maybe that is the problem. Maybe the people who get to talk about war ethics and new tools of war, are ultimately going to be too biased. At least Latiff is aware of this bias since he raises the issue of the conservative and “yay war” bubble many of his colleagues work in and calls for the general public to be involved.

I wrote down a lot of comments as I was reading (see below) because of my frustration. One of my first comments was the “America: Fuck Yeah!” sentiment that was present. I don’t think that is entirely fair to Latiff. He does express a reasonable level of awareness, but when someone talks about “keeping America safe” you really feel like forcing them to include a list of war crimes, atrocities, and coups that the USA has been involved in.

If someone is planning how to kill others, particularly lots of others, then that is unethical.

The arguments around Just War Theory and the ethics of war strike me as hand-waving bullshit dreamt up by status quo warriors. Unfortunately, I don’t have the background in moral and ethical philosophy to really dig into how it is wrong. No doubt there is a lot of material justifying war because that’s what very serious status quo academics do as part of their contribution to the war effort so that no one ever asks them to actually fight and die in one.

Ironically, by the definitions of Just War Theory, I think you’d battle to find an example of a Just War. Which makes the entire idea of ethical warfare a comfort blanket to pull over your face as you invade a country to secure their resources freedom.

Some people are scared of the technology and potential of future war portrayed here. I’m more scared of how Latiff’s calls for a discussion of the ethics involved aren’t going to happen in any meaningful way.

Comments as I read:
Only two chapters in, but already there is this overwhelming “America: Fuck Yeah!” attitude present. Threats could get hold of the weapons we’re developing… is said unironically. USA aren’t working on this (anymore after a feasibility analysis) but China doesn’t have any such ethical compunctions…

Considering this book proposed to cover the technology and ethics of future wars in the opening, I’m already sensing that Latiff is probably going to pretend that the USA has never committed acts of genocide, war crimes, invasion, etc. whilst insisting they need new cool gadgets to do more of that stuff with.

Halfway in the new technologies are being discussed as inevitable. But it is then asserted that new tech will be used for war. That doesn’t have to be so. Kinda feels like no-one ever stops and makes the argument that massive military research budgets could instead be civilian research budgets. Can’t really weaponise something when you’re not starting out building it as a weapon and pouring billions into doing so.

Three quarters in and the ethical discussion is taking shape. Just War and the like are being utilised. Some really good points are made but then are undermined by selective presentation of realities. E.g. Latiff makes a really good point about requiring strong ethical and moral frameworks (Warrior Code, etc) in the development of weapons, use of weapons, and the accepted practices of troops (when politicians justify or promote the use of torture, the command structure will follow, and thus the troops will utilise it). But he then skirts around how the military have been indoctrinating soldiers with increased efficiency to be killers, how they have researched making their soldiers more able to kill people, how they train them to think of “the enemy” as “inhuman” to make them able to justify killing to themselves.

I’m really having trouble with the supposed ethics of all this. Ultimately, all this tech is being developed to kill people. That’s premeditated murder. Ergo, that is unethical. There isn’t really a justification for that. A lot of handwaving is done based upon the idea that “the other side” will behave unethically, so we have to be prepared to “defend ourselves” (i.e. to also act unethically). The worst part is that this self-perpetuating cycle is often leveraged to gain power, resources, and profit (the latter is mentioned briefly in the third section by Latiff).

Philosophically, a lot has been written about Just War Theory, particularly against criticisms of it. I’m somewhat surprised that there isn’t a solid argument against it. Take for example Jus ad bellum. Let’s find a war that fits that definition. Particularly from the losing or instigating side. Ever. Just War Theorists certainly seem to try and pretend this occurs. People trying to kick wars off certainly try to make the argument of just cause (etc.). But most of those arguments are hollow, revisionist, and often straight-up lies (WMDs in Iraq anyone?).

Almost feels like a lot of money gets thrown at people to justify war.

Last chapter has some interesting points about echo chambers, ideological divides, society involvement, and American exceptionalism. All very good points. But again I find myself spotting what Latiff doesn’t discuss and what he skips over.

E.g. He says that the average American is removed from war and largely uninformed/ignorant of it. But that is by design and moreover, the military is actively involved in keeping people ignorant. He made a point about no war critical films having been made whilst skipping over the fact that if a production studio wants to make a military film they need to have everything ticked off on by the military (it’s why US military is awesome, bad elements are rogues who meet justice, they never commit war crimes, etc, etc.). Military intelligence was actively involved in the lies that took the US to war in (insert massive list here). The military routinely covers up atrocities, war crimes, abuse, rape, etc.