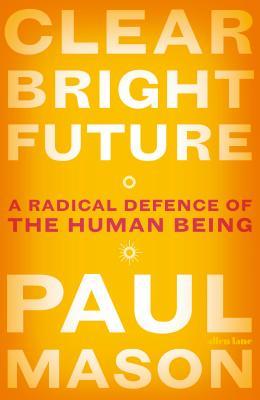 Clear Bright Future: A Radical Defence of the Human Being by Paul Mason
My rating: 4 of 5 stars

Humans: Okay, no killing people.
AI: Slavery is cool though, right?
Humans: No, no killing, no slavery!
AI: But you do it all the time. No fair!

Clear Bright Future is Paul Mason’s attempt to address the “value alignment problem” with regard to our society and the potential of AI. He sets out how we largely don’t have a set of values, thanks to things like neo-liberalism, post-modernism, and scientism, and how we desperately need to define our values. Those values, he argues, should be clearly defined, humanist, and done before the capitalists, authoritarians, or other ne’er-do-wells ruin the future.

I first became interested in reading Mason’s books when I saw his Google Talk about Post-Capitalism. He was one of the first people I’d heard make a clear argument for something that is lurking in every digital age IP lawsuit. Clear Bright Future jumped up my reading list thanks to my local library and an interview where Mason discussed the need for society/humans to decide what we value and to start making it a priority.

And here comes the but. But, I think Clear Bright Future falls down as some points made are attacks on strawpeople or gross simplifications. He’ll swing between exacting explanations and diverse insights and then make quick leaps via these lazy tactics.

Take for example his comments about science moving from claims of hard objectivism to (a more realistic) subjectivism. Mason essentially engages in a confusing blend of scientism and anti-scientism. He talks as if science is simple hard facts (when it is within X% error, contingent on assumptions, within certain frames of reference, etc.) and then rejects the science that shows things are more complicated than that.

Another example is his criticism of postmodernism as anti-humanist and the foundation of a lot of today’s problems. Somewhere there is a philosophy professor shaking their head and chuckling at the idea that postmodernism texts have resulted in anything other than incomprehensible books and an industry of metanarrative loving critics blaming it for everything. At best, Mason is mistaking a part of the field for the whole. Sure, the rejection of the simplistic and metanarrative claims of earlier humanism is certainly a po-mo thing, but hardly the whole thing (e.g. see this)

These flaws do detract a bit from what is a very interesting book with a compelling message. Definitely worth reading and thinking about what our values are.

Comments while reading:
You can sustain an economy on life support, but not an ideology. People were starting to ask when things would get better for them rather than for yacht owners. (Paraphrased)

Having seen some of Mason’s work before I’ve been interested in his take on things. He offers insights and ideas you haven’t considered. I also find I don’t entirely agree with his conclusions. In one part he was outlining the idea of material realism (materialism) which was a pretty decent lay explanation. But then he sort of created a strawman to suggest that modern tech economies claim to create value out of nothing (computers create their own data, thus value, without work). I’m not sure that the people who say that actually believe it, rather they are using a heuristic.