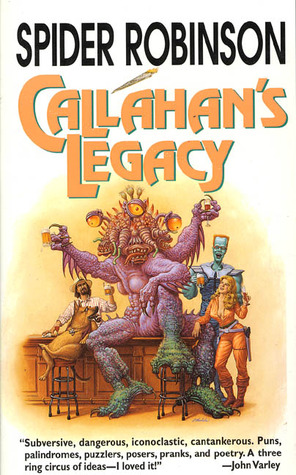 Callahan’s Legacy by Spider Robinson
My rating: 3 of 5 stars

The next round is on me.

Jack and Zoey are two bar owners expecting their first child last week. The bar’s patrons are also their close friends who hail from all walks of life, time, and weird occurrences involving saving the world. What should be just another fun evening of drinks and song is interrupted by new patrons and trouble.

The Callahan novels were recommended to me via a list of humorous books. The only one I could lay my hands on easily was Callahan’s Legacy, one of the later instalments in the series. It seems to be representative of the rest of the books, as near as I can tell, and fans seem to enjoy it.

I’m really not sure what to say and how to rate this book. It was mildly amusing, the banter flowed freely, and some of the puns were ingenious. But I could pretty fairly say that virtually nothing happened in the story. This was pretty much a novel devoted to documenting an evening of drinks between friends, some of whom are aliens, resurrected early 20th-century scientists, and people from the future.

I’ll be generous and give this 3 stars because I quite liked the joke about the Buddhist Burger Joint that made you one with everything.