Unlike Civil War, I managed to read the Ed Brubaker series of comics before watching the Winter Solider movie. Obviously there are a lot of differences, especially in terms of the expanded universe and “realism” of the movie world. The comics have decades of plots, sideplots, overlapping arcs from other parts of the Marvel Universe, characters, and general junk that is impossible to pack into a 2 hour movie. I actually find the way Marvel and DC have their stables of comics overlap and exist in the same universe to be annoying. The movies are starting to head that way as well, what with Age of Ultron essentially spending a third of its run time building the associated Thor, Ironman, Captain America, etc, movies.

One of the differences not really covered in the CineFix video is the other Captain Americas. That’s right, several other Caps wore the…. cap. Anyway, while Steve Rogers was chilling (Bucky too, but in a separate location) America didn’t want to lose its figurehead so they had some other people fill the role. From memory, at least one of them was integral to the plot, despite being no longer all there. This part of the plot also fed into the series that came immediately after Winter Soldier, with Bucky donning the costume and hefting the shield. For anyone about to complain about spoilers with that last sentence, try not to think about what could have happened to Steve Rogers to require Bucky to become Captain America.

In my original review for the Winter Soldier movie I commented that the writers had managed to capture Brubaker’s cold war spy story feel. They did this with very little similarities between the comic and movie. In some ways I think the movie is better, certainly I like the Steve Rogers of the film more, and they hadn’t quite gone overboard with the expanded universe stuff at that time, but in others the usual restrictions of the shorter format lessens the possible storytelling (Crossbones, the other Captain Americas, the relationships). Two very different stories were told but I still think this was a good adaptation. 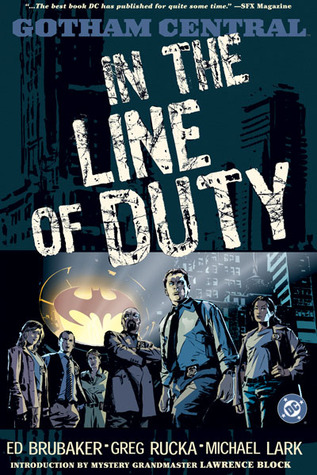 Gotham Central, Vol. 1: In the Line of Duty by Ed Brubaker
My rating: 5 of 5 stars

With the new TV series Gotham currently being cast there has been a bit of buzz around what the storyline is going to be about. Unfortunately it is not going to be based upon this excellent series by Brubaker and Rucka (should also mention the art by Michael Lark). This would actually be a great way to do a non-Batman series, especially as it would be able to use the recent Nolan films as a lead in.

I guess people who read will be the only ones to appreciate a series focussed on Gotham city police trying to work in the shadow of Batman.

I know, another book review and none of my usual wit and original material. Bear with me, I’ve been doing a lot of reading lately to make up for the fact I’m back at work. Christmas holidays are always too short.

The Hunter: A Parker Novel by Richard Stark
My rating: 4 of 5 stars

I like gritty, unless we are talking sandwiches. The crime noir genre really is all about gritty and Parker is the quintessential character embodying this.

Once again I’m late to the bandwagon. Clearly Australia doesn’t have enough German and Japanese influences to have clear bandwagon schedules. Or maybe it is just me, but I prefer to blame others for my failings, like many great men before me. There was a point here about being late…. Oh yes, Richard Stark – aka Donald Westlake – and his Parker character are not new entities, thus my reading of my first Parker novel is probably well overdue.

The reason I came to this series was two-fold. The first was I had recently watched the director’s cut of Mel Gibson’s Payback. The director’s cut was much more faithful to the source material than the original version, despite being made more friendly to a wider audience. The second reason was that I have also been reading a lot of Ed Brubaker’s graphic novels, such as Criminal. At the back of each edition of Criminal there are essays on crime movies and books that started and were highlights of the genre. The Parker series caught my attention for this reason.