With many of my favourite shows now back on air for 2014, except the ones that were cancelled, I thought it was a good time to recap what kept me entertained on the small screen in 2013.

Many people have noted the rise of decent TV, leaving behind the days of formulaic plots (e.g. CSI whatever), sit coms that lack the comedy (e.g. Two and A Half Men), dramas that lack plot (e.g. Lost), lame reality TV shows (e.g. Duck Dynasty), and the cancellation of a Joss Whedon show before it got a chance to be awesome (e.g. every show he’s ever made). This is at the same time as movies have failed to produce anything particularly memorable or interesting in quite some time.

I actually have a theory (by theory I mean hypothesis) about why there are fewer and fewer decent movies. It comes down to this little figure: 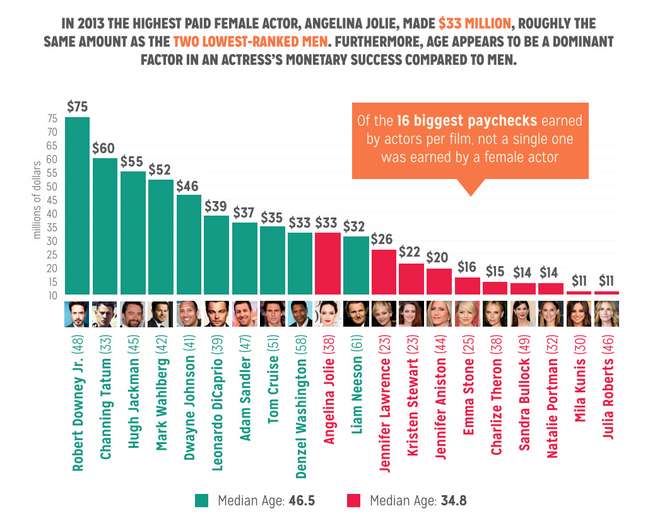 Let’s leave aside the gross disparity between the highest paid actor vs. actress discussion, instead let’s focus on those paychecks. You stick just one of those stars in a movie, just one, and you are going to have a really expensive movie that is going to battle make its money back at the box office. Movie studios know this, so they spend up big on special effects, production values, promotion, etc, to lure people into the cinema. But in an effort to attract as large an audience as possible to make up for this huge spend, they make the movies as bland as possible in order to accommodate a wide audience from around the world. The reason that movie sucks isn’t because it is aimed at 12 year olds, its aimed at 12 year olds who probably don’t understand idioms due to being in a different country/culture.

And this is why we get a list of gems on the small screen, because the writers, directors, and quite a few actors, have realised that in order to tell good stories, they can’t spend huge dollars (unless it is on prime time crap). 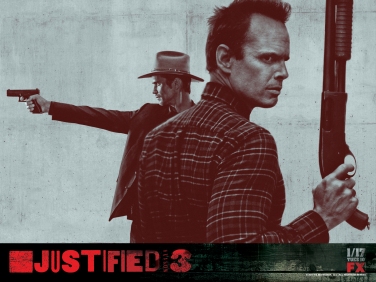 Possibly my favourite show of the past few years. This is not only well written, the entire cast and crew seem to have this knack for creating great TV. Plus, last season featured Patton Oswalt.

I love this show for its wit, humour, modernising of the classic Sherlock Holmes stories, and the casting. Some have accused it of being smug, but I see that as central to Sherlock’s character, thus welcome in the show.

I read the prequel novel by series writer Neil Cross and it was every bit as good as the TV show. Idris Elba took a break from fighting monsters in giant robot suits in order to make another season of this fantastic crime drama.

When I describe this show to friends, they always come away thinking that I’ve described a violent, b-grade, action movie with plenty of nudity. Just another throw back to the pulp novel trash that I also have occasion to read. Well, yes. The problem being? The best new show on TV in 2013, hands down!

I really enjoyed the first season of Person of Interest. The second season was more of the same but brought more of the very interesting character portrayed by Amy Acker. Season 3 was off to a good start before the non-ratings break. Now that I’ve raised that point, why do we even have a non-ratings period any more? TV watching habits have changed, the networks better change with the times or lose out to the internet… oh wait, they are.

I discovered this sci-fi gem by accident. One of the problems I’ve always had with time travel in books, TV and movies is that they don’t deal with the paradox very well. Even in Back to the Future it is almost played for a joke. This series is well written and actually has the paradox central to its story structure. It also helps that Rachel Nichols does a good job of holding the series together.

Another post-apocalyptic story, ho-hum. This series has an interesting take on what would be society’s downfall and what would subsequently happen. There is a lot to like about this show, especially Billy Burke as a bad-ass. Although, after the first season, I didn’t see much point in having a second season and won’t be following it.

This is one of the few mainstream shows I find watchable. It is pretty much down to the fact that they have some good fights, an interesting premise culled from the source material, and that the actors have done the hard yards physically for the show (especially Stephen Amell and Manu Bennett). Makes me want to build a salmon ladder in my backyard.

Not often that a web series could attract a big name director like Bryan Singer (of the decent X-Men movies fame) to make a series of short scene sci-fi. I’d characterise the series as essentially 48 vignettes with overlapped characters and story, as most episodes can stand alone to some extent, despite being part of a larger narrative.

Quite simply, this show is the funniest thing on TV. In the proud tradition of cartoon comedies, it is able to do things that other TV shows and comedies can’t, due to financial, legal or ethical constraints. This series is also one of the few with DVD extras that you would actually want to watch. One of the best is when Archer has an accident and is transformed into a character much more like his voice actor, with ensuing gags around this.

This Aussie comedy-drama has been a consistently witty and interesting tale about a self-destructive Sydney barrister. Normally Aussie humour doesn’t translate well to other parts of the world, but Rake has been adapted for the USA, with Greg Kinnear replacing Richard Roxburgh.

The Walking Dead – so sick of that fucking farm!

Marvel’s Agents of Shield – this should have been good, but was meh.

The Booth At The End – interesting premise but didn’t grab me.

The Following – I can honestly say that this series squandered such a great premise with derivative and clichéd story.

The Blacklist – this was interesting only because of James Spader. Needed more than that.

Vikings – interesting but too slow moving.

Hannibal – this was fantastic. I don’t know why I haven’t watched more, but I just haven’t.

The Game of Thrones – after watching the first season I had had enough. You only have to watch this far to see Sean Bean die, so game over.

Breaking Bad – I’ve dropped in and out on this series, watching episodes throughout. I’ve really enjoyed it, but not something I’ve made time to watch all of.

Arrested Development – yeah, I know. I should be a rabid fan.

The Killing – both the US and the Danish Forbrydelsen are slow boil crime shows that I’ve started watching and not continued. No particular reason for stopping, just haven’t gotten to the rest of the episodes yet.

Borgen – have heard great things, but just haven’t gotten to it yet.

A while back I wrote a post on how sharks aren’t the deadly monsters attacking people all the time that we think they are. Now I’m not suggesting that we all go and hug sharks, they only like to be touched by cleaning fish, nor that we jump in to swim with them, they play tag far too roughly for delicate humans. What I’m suggesting is that we really need to start worrying about stuff that is actually a concern rather than stuff that is just wild gesticulations in front of a camera for ratings.

So here is a list of things that kill more people than sharks annually: