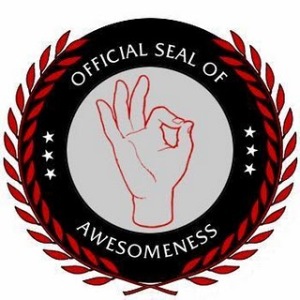 Last year I instituted my best reads of the year, The Awesomes. I’ve read a few books this year (+90) and have decided that I needed to talk about my favourites of 2012 and award this year’s Awesome™.

As you will have noticed, my reviews of books are more about my impressions of the book and talking about how much I liked the book, rather than a recap of the plot, etc. My reasoning behind this is simple, I want to say “read this book” to people rather than fall into my bad habit of spoiling the ending, or being a bitch about books I didn’t enjoy. My list is based upon what I have read this year, so obviously, some great books have missed out due to lack of reading hours in the year. Also, my read list does include some books that were published prior to 2012. There were some categories that were sadly under-represented and some that had some very intense competition. Also, the fact that I finished a book shows that it was worth reading. I have my reading rules that stop me wasting valuable reading time on books I’m not enjoying. This means that any books on my read list are entertaining (well, unless I was particularly disgusted with the crappiness of the book in question).

Temple of the Gods – Andy McDermott

And the winner? Blasphemy by Douglas Preston.

Temple of the Gods – Andy McDermott

Tough category, but always hard to go past Matthew Reilly.

Another tough category this year. I’m going to have to give this one to Leah, with Tara, Michael and Robert close seconds.

Right What You No – Tyson Adams’ blog

I’m allowed to be self-congratulatory. Plus I didn’t read any funny books this year.

This is an oxymoron, so it is invalidated as a category.

I didn’t read any 5 star graphic novels this year, but two series came to an end that were worth a mention: The Boys by Garth Ennis and Irredeemable/Incorruptible by Mark Waid. Both series were very strong and explored interesting aspects of the superhero genre.

I still try to avoid poetry as much as possible, mainly because of ee cummings.

Assassin by Tara Moss
My rating: 5 of 5 stars

Trying to read with a newborn in your arms is tricky. You try to get them to sleep and then realise you haven’t been reading all of that time. You try to feed them and realise that Zaphoid was right, a third arm does come in handy. This all adds up to making it hard to enjoy a good book.

The fact that I did enjoy this book shows just how good it was, because my reading has been very interrupted. Mak is back in what appears to be the finale in the Vanderwall series. Since the last book, Mak has been hiding out in Spain, but it isn’t long before assassins get wind of her location and she is headed back to Australia.

If this is the end of the series (I’m going by the novel, I haven’t heard Tara mention anything on this) then I think it ended appropriately. Some authors, TV shows and musicians drag out a series for too long. Tara has avoided that nicely. Now the only question is, will she continue in the crime genre, or will her paranormal novels be the focus now?

NB: This was a signed copy. Book fans may appreciate that detail.

Just like the previous two installments of this e-book saga there will be allusions to some non-existent struggle, my thoughts on the changing publishing industry, no Leia in a bikini, and definitely no Wookie. When we left our hero writers, they were diligently trying to decide whether they wanted to sign with a traditional publisher or self-publish like an indie rebel. Publishers had the track record, the self-publishing indies had the jump on the fastest growing segment in the industry: e-books.

Now hold on just a second. Traditional publishing is behind? As has already been stated in this blog, his mouth to my post, Michael Connelly is selling 45% e-books. His publishers are clearly on board of this new market place. James Rollins and Steve Berry have both released exclusive e-book short stories on Amazon and B&N as lead-ins to their next books (pity non-US people can’t buy them, not being close enough to the centre of the universe and all). I even noticed that Aussie authors like Tara Moss and Matthew Reilly are available on Kindle for under $10. Behind isn’t quite right.

On the other side of the great divide, all the cool kids authors are self-publishing. People like Konrath, Eisler, Mayer, some guy named John Locke, are doing well out of self-publishing and doing all the work themselves (or hire for service). Clearly all authors should be grabbing their manuscripts and uploading them now.

I’ll pause so you can upload your book now. Don’t forget to spell check first!

Well it seems that 10’s of thousands are doing just that. Given that 90% of everything published is probably crud, you have to question how wise it is to rush to publish. We also have to remember that e-books are still a minority share of the market place (this will change of course). Shouldn’t quality come first? Spend the time on crafting a fine book, see what industry professionals have to say about it, then publish? Preferably not the professionals that published Snooki. Basically writers will have to find the best publishing deal for them, even if it is swapping their novel for a packet of magic beans.

And here is a startling fact: readers don’t care if writers are traditionally published, indie published, self published, or published by a small Scottish Terrier named Rolf. Readers want to read something entertaining and well written. So writers shouldn’t care how they are published. To quote Nick Spalding:

What I love about e-books is that they are made for readers. Well Duh! Stick with me on this one. Lets say that it is August 2010 and I’ve just finished 61 Hours by Lee Child. Now Lee may or may not have finished with a cliffhanger in that particular book. Despite the fact that the next Reacher novel is finished and ready in boxes to go on shelves, I have to wait until the end of September to read Worth Dying For. With e-books there is no need to delay because of printing, shipping, and shop displays still being filled with James Paterson’s books. In fact, with e-books I can have the entire Reacher series downloaded the minute after I’ve finished 61 Hours to keep my spirits up while I wait.

Essentially the gap between writer and reader has been shortened. The reader is King.

So what about publishers? Well they sell books. Authors write those books for them. I don’t think that in the long run they will particularly care whether they are selling an e-book or a DTB. In fact e-books could really cut out a lot of their middle men costs.

A lot has changed in the past year or two, some of the big companies are behind to some extent, but are more likely to catchup. I still can’t believe that e-readers weren’t dreamt up by publishers and bookstores. But then again I can’t believe that Australia – lots of sun – has sent solar technology to Germany – no sun – and politicians are wanting to move from coal to gas.

As long as publishers are paying advances, advertising/promoting authors and fronting costs they will be who most authors will turn to in order to publish. And when the publisher rejects it, and the crying has finished, the author will release it, plot holes and all, on their own.

Can I just point out that an e-book is a book. That you can read. Thanks for letting me clear that up.

Tenuous reasons for bookshops continued existence aside, I don’t see why there won’t be purveyors of fine literature, and the stuff I like reading, into the future. Online stores are often seen as more reputable when they have a physical storefront. Even if that storefront is never visited by anyone because it is located down a side street, off a back alley, near a crack den. Plus POD could make book buying like a trip to the deli counter for lunch.

“I’ll have the new best-seller and a long white to go thanks.”
“Did you want that signed or unsigned?”
“Hold the signing, but I will take the first chapter of the sequel at the back.”

As a reader and as a some-day published author, I think that the future is so much brighter for readers and writers. Readers will have access to more good books than ever. Writers will have greater access to an audience than ever. The future of books is very bright and may even step out of the shadow of DVD’s, when DVD’s become obsolete.