Book review: A History of Western Philosophy by Bertrand Russell 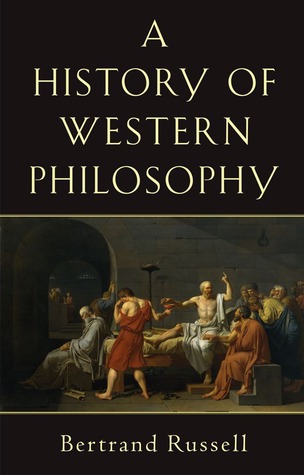 A History of Western Philosophy by Bertrand Russell

An important point was left out of this book: The history of philosophy is also a history of drunks.

Bertrand Russell has attempted to give a brief overview of the History of Western Philosophy. In this 900 page tome he touches on the major figures, major fields of thought, and the socio-political backgrounds that influenced (and were influenced by) them. Russell also offers up some critique on these aspects, because it wouldn’t be a philosophy book if it wasn’t doing so.

This description sounds like anathema to entertaining reading, and it would be if it wasn’t being tackled by someone like Russell. Bertrand has a very clear, concise, and accessible writing style, and is easily able to explain in plain language even the most complex of philosophical ideas. Normally reading philosophy reminds me of reading genetics textbooks, as it is overstuffed with pedantry and jargon, Russell makes it feel like he is uses no jargon or technical terms.

It should also be noted that Russell is snarky to the point that you find yourself having to laugh and share his comment with someone. His comments are withering and witty, but they also serve as a great way of highlighting the flaws with certain arguments or “great” thinkers. If there are a few takeaway points from this book it is that the great minds were way ahead of their time, but that those same minds were confined by the structures of their time. It makes you wonder how many of today’s ideas are going to look silly and biased to future peoples.

This isn’t really a book to read about certain philosophers, nor fields of thought. A History of Western Philosophy is more a cliff notes version of several thousand years of thinking. Definitely an emphasis on the history and context. And it is all viewed through Russell’s eyes, his snarky, snarky, eyes.

2 thoughts on “Book review: A History of Western Philosophy by Bertrand Russell”