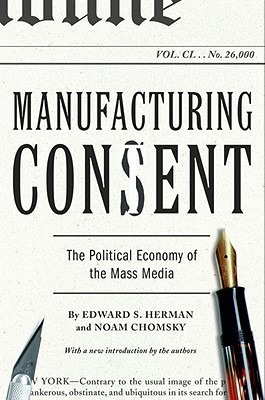 Manufacturing Consent: The Political Economy of the Mass Media by Noam Chomsky

Don’t believe everything you see in the news… but which bits?

There is a narrative we hold to be true: that the news media are trying to inform us of the facts; that they search high and low for the truth; that they are honest and hardworking; and that they hold truth to power. Manufacturing Consent presents the argument that they often don’t do that at all but instead operate under the Propaganda Model of media.

Almost a decade ago, I attended a panel session about news journalism that billed itself as to how award-winning journalists hunted down and exposed the truth. I walked out about half-way through from disgust. You see, these award-winning journalists had been patting themselves on the back for having done what I regard as the bare minimum of fact-checking on a story and had managed to discover something. These were the people we relied upon for our information.

While that wasn’t the first time (nor the last) that I’d run up against the failings of the media, it was the moment that has come to summarise my view of the media. I think that is why Chomsky and Herman’s thesis in the book feels familiar.* The way media act to perpetuate the status quo and the interests of power and influence is well articulated if unsurprising.

There were a few issues I had with Manufacturing Consent. The first was that the introductory chapters, including the preface written in the early 2000s, and the final chapter were excellent, but the middle case study chapters erred on the side of exhaustively labouring the point. I mean, the history of various conflicts was fascinating, but not exactly what I signed up for when I started reading.

The second issue I had was that this book feels somewhat out-of-date. The examples were from a previous generation of media. While it appears that much of the propaganda model still holds, you have to question if it isn’t far more nuanced now. Media ownership has become even more consolidated, the diversified online media landscape has made attention seeking and funded agenda pushing the norm, partisanship is leveraged for audience retention, media owners and management are more overtly pushing agendas, and lobbyists and other bad faith actors exist in all aspects of public discourse driving narratives. Power is Feeding the Chooks** now more than ever. It feels like the propaganda model and the 5 filters are still highly relevant but in need of an update to capture the new realities.

Another issue was one that was briefly touched upon in the final chapter. The propaganda model tends to assume a level of competence and diligence to journalism and the media. I often use Hanlon’s Razor: Never attribute to malice that which is adequately explained by stupidity. A lot of the reporting being attributed to a propaganda model may actually fall under the lazy, incompetent, and uninterested model instead. Although, that could be seen as part of the 5 filters of media selection – or to paraphrase Chomsky: if they were actually good at journalism they wouldn’t be working there.

My final issue was around solutions: what are they? There aren’t any solutions posed, both from the point of view of a media consumer trying to be well informed and from the point of view of a society wanting a reliable media. Some ideas are alluded to, such as the reports from independent groups covering an issue (e.g. Amnesty and America Watch were mentioned), which also requires an active audience who seek out information (i.e. lateral reading and fact-checking). But I feel as though this was an important set of recommendations to explicitly state.

A very interesting and insightful book that is well worth a read. Be warned that the case studies are more of a history lesson than you’d probably be expecting.

The 5 Filters of the Mass Media Machine

* Although, it may feel familiar because this text has been in the “mainstream” for decades, so much of it will have found its way to me without having read it directly.

** For the non-Aussies, Feeding the Chooks was a term for Press Conferences from one of Australia’s most corrupt politicians. Sir Joh would wait until journalists were desperate for information and then feed them timed propaganda that they wouldn’t question due to deadlines – hence, feeding the chooks. He was an authoritarian who rigged elections (sorry, gerrymandered…), essentially ran a police state, held the press in disdain, was generally racist and homophobic (although, kinda standard for an Aussie conservative from Queensland), and marginalised workers and unions.

Update: I’ve learned that Matt Taibbi wrote a book called Hate Inc. that was originally intended to be a modernising of Manufacturing Consent with Chomsky’s approval. It changed a bit, but addresses some of the issues I raised above.