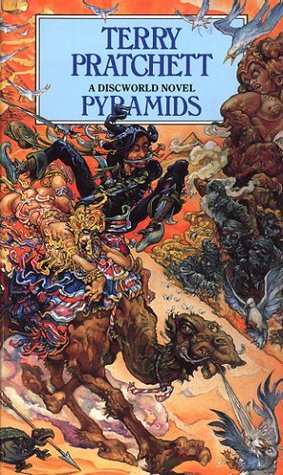 Camels would receive more admiration if they published in the peer-reviewed literature and spat in fewer people’s faces.

Teppic sets out from home to learn a trade. An honourable trade. An important trade. A valued trade. So he attends Ankh-Morpork’s famed assassins’ school. But he has barely graduated when his father dies and he has to return to the family business: king of an ancient land. His new worldliness clashes with the millennia of tradition held in place by the priests of Djelibeybi. These traditions lead to cataclysm and Teppic has to save the land of pyramids before war breaks out. Because war has to break out. It’s tradition.

As I was reading Pyramids – the bit with You Bastard calculating the flares – the sheer scale of the Discworld novels struck me. There are so many little pieces crammed into each book that you wonder how Sir Terry managed to repeat that effort over 40 times. It probably struck me because Pyramids is a more straight-forward narrative with a focus on the character of Teppic. When compared to many of the other Discworld novels I’ve read of late, this one is an “easy read”.

Definitely a 4 mathematical genius camels out of 5 novel.