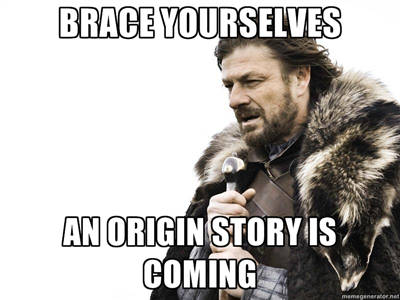 With the run-away box office success of some of the comic book movie adaptations, you could be excused for thinking that comic book movies don’t suck. Sure, stick Robert Downey Jnr. in a movie and you are bound to bask the movie in his reflected awesome. Put Joss Whedon in the director’s chair and he could make paint drying fun to watch. But when all said and done, comic book movies are fatally flawed for the following reasons.

Did John McClane need an origin story? Did we need to see him join the police academy, walk the beat in montage form and get his detective shield before taking on Hans Gruber? NO! So why do we need to go back and see how every superhero became a superhero? If Charlies Angels can get away with having us believe that three rake thin girls can successfully beat the crap out of a group of guys twice their size whilst wearing stilettos without an origin story, I think we can just take it on faith that The Punisher has issues with criminals.

He can leap tall buildings in a single bound, he can change the course of rivers with his bare hands, but he still needs to punch a normal person like he’s Ali squaring off against Foreman. Let’s face it, if a superhero actually wound up and threw a punch like we see in the movies (or comics for that matter) to hit a normal person, their fist would go clear through the person’s body, which would be kinda cool to see on the big screen.

The most egregious use of this strength imbalance, in my opinion, is in Spiderman 2. Remember how Spiderman stops a speeding train using just upper body strength? Remember how he then has an extended fight with Doc Oc where he repeatedly punches the mad scientist in the face? Now I know that the Doc did have some cool new appendages attached to his body, but the rest of his body is still pretty normal. Yet we are meant to believe that Spiderman can’t throw a punch to save his life or that Doc Oc’s head can withstand a blow that is stronger than a speeding train.

I’m almost certain that superhero costume designers and comic artists are BSDM fans, nothing else can explain Catwoman’s costume. Now being a heterosexual male I find nothing wrong with the casting of attractive women to be wearing spandex or lycra bodysuits. Sure, it must be hard for the women to stay in shape, kick ass and say their lines, but we sure do appreciate it! I’m sure the flip side is also true, that the female audience members love to see the chiselled muscle of the male actors displayed either shirtless or clad in the most figure enhancing costumes possible. I’m sure that the LGBT crowd have their respective tastes sated as well.

But here is my problem with spandex and lycra: no-one actually looks good in it and it is not very practical. If Batman were really deciding on what to wear when fighting crime, he wouldn’t be deciding on a cape and cod piece, he’d be looking for body-armour and a backpack for lugging around all of his Bat-gadgets. What about pockets? Where do you keep your phone and spare cash? And what happens if the superhero hasn’t had a chance to fight crime recently or has had a lot of charity dinners of late? Spandex and lycra are just going to display those meals and extra flab straight away. They’d become too self conscious to leave the house to fight any crimes. Norman Osbourne has taken hostages down-town  Sorry, I have a muffin top and can’t be seen in public.

After an epic fight that levels half the city the bad guy goes to prison and we have ambulances treating all the poor people who sustained a few cuts and bruises. After beating the living crap out of each other for 20 minutes, the good guy and bad guy have a sum total of a bloodied lip and a bad case of out-of-breathness. Then, of course, the bad guy dies in some elaborate death scene that cuts-away just before the gory bit.

On the plus side, there is plenty of shooting, explosions, car chases, fight scenes and general mayhem to keep anyone amused. But no tits. Definitely no tits. Because we wouldn’t want kids to see anything that could harm their little minds.

The laws of physics don’t apply

You know how when fat people sit down on something you hear it complain? What about the bowing that occurs? What about those permanent dents that your poor couch has from your fat uncle at Xmas time, not to mention the smell? Well, in the movies that doesn’t happen. Iron Man sits on a couch and doesn’t look a gram over 80kg, yet all that armour should be making it bow like your fat uncle after a plate of turkey. But it isn’t just that. Where are the crumple zones in that suit? What about air-bags? What about how squidgy Tony Stark would become being rattled around inside that suit?

Superheroes defy all sorts of laws of physics, whether it be jumping off a building and landing on the ground in high heels as though they just needed to tie their shoes, or casually picking up a car to throw at someone without their fingers tearing straight through the light aluminium panels. Also, why is it that the superhero always has super-clothes? Whether it be Wolverine’s amazing self healing singlets or the general indestructible nature of most costumes. Whoever designs those things could make a fortune!

Is it a bird? Is it a plane? No, it’s quite clearly Clark Kent without the glasses.

How stupid are the people of Gotham? A Dark Knight rocks up wearing expensive high-tech gadgets, driving a really cool car at the same time a troubled billionaire returns home: how much of a leap do people have to take here? Even Hal Jordan was unmasked by his girlfriend, how long would it take other people to catch on? At least Tony Stark just came out and admitted it.

This is related to the physics point. Explosions in real life are never as spectacular as movie explosions. Car falls off a cliff: instant fireball. Helicopter stops helicopting: instant fireball. Gas from the stove left on for a few seconds: house explodes into a million pieces. Captain America ducks his head behind his shield as grenade explodes: doesn’t have exposed legs blown off.

In comic book movies everything explodes at the lightest touch. Somehow The Hulk crushing a car causes it to explode, rather than just leak. But not just explode, EXPLODE!!! I don’t know how much high-octane petrol and C4 the average person keeps in their car, but it must be a lot more than I do.