The Fast and Furious series continues to make money at the box office. I have previously summarised the movies but it is time for an update.

The Fast and the Furious
Vin Diesel and Paul Walker prove that by combining the acting chops of Keanu Reeves and the charisma of Patrick Swayze you can recreate Point Break with cars.
Fun Fact: Boys under 25 were inspired to buy Toyota Supras by this movie. Failing that, they attached hi-flow exhausts to their Hyundai Excel.

2 Fast 2 Furious
Diesel was 2 busy and subsequently introduced Tyrese Gibson to the series. Thus started the series long question “What is he doing here? Is he the comedy relief without the comedy? Why hasn’t he been accidentally shot yet?”
Fun Fact: Someone actually thought you could replace Diesel with Gibson.

The Fast and the Furious: Tokyo Drift
Lucas Black and Bow Wow make Diesel and Walker look like Shakespearean actors. Even with the most cars and jailbait in skirts, we still wonder how this is a Fast and Furious movie.
Fun Fact: This movie got made. No-one is quite sure how.

Fast & Furious
Diesel and Walker return to remind us that as unlikely as it would seem, they make this series work. I’m sure there was a plot and stuff probably happened. Cars exploded though.
Fun Fact: This wasn’t released direct to DVD. 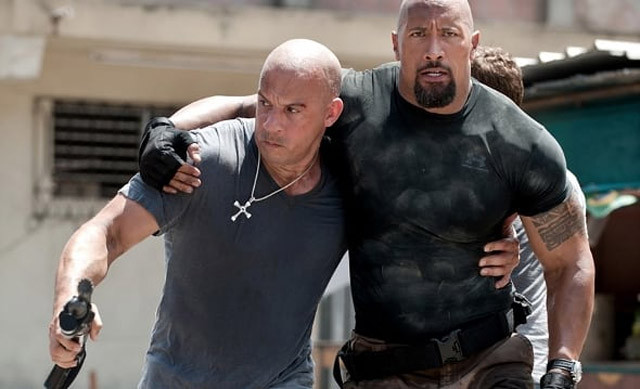 Fast & Furious 6
The Rock gains an endorsement from Under Armour and Johnson’s Baby Oil to help hold this film together. Characters get resurrected. Others die. We are painfully reminded that street racers are not professional mercenaries.
Fun Fact: Tanks and Planes can be destroyed with sports cars. Engineers and the military are working together to figure out how they got things so wrong.

Furious 7
Hey look, we just made a billion dollars with this movie. Pretty impressive for a movie that is a loosely strung together series of set pieces designed by a kid with a Hot Wheels obsession. The heroes also decide that they want to see how many innocent people they can get caught in the crossfire for the final showdown.
Fun Fact: They actually did a touching send off for Paul Walker.

The Fate of the Furious
The Rock and Jason Statham are now the stars of the series. They have all the coolest scenes and make you gloss over the various characters who have disappeared.
Fun Fact: Did you know that Lamborghinis were bulletproof? Apparently a grappling hook goes straight through the door but not any bullets. Amazing engineering.

Fast and Furiosa
Charlize Theron returns as the villain. The Rock and Statham join forces to stop the Imperator. Diesel fights for relevance in the series with huge doses of steroids. They probably use cars despite them not making sense for the plot.

Furious and the Walking Dead
CGI advances to the point where Paul Walker is resurrected for the series. This once again gives Vin Diesel relevance to the series. The Rock and Statham pull out the zombie fighting kit and attack the uncanny valley.

There is nothing worse than picking up a book, movie, whatever, expecting to be entertained based on the cover. The above example is the movie Far Cry, starring Til Schweiger, in what looks like a cool action flick. The description even makes you look past the fact that this is a video game adaptation, promising a slick action-eer:

An ex-special forces soldier turned boatman is hired by a journalist to investigate a top-secret military base on a nearby island.

The problem with this packaging is that this is a film by Uwe Boll. Til Schweiger is a fantastic actor and a major box office draw card, especially in his home country of Germany. He was also the driver behind one of my favourite films of all time, Knocking on Heaven’s Door. Yet not even Til can save us from the worst director of all time.

One of the things that amazes me about Uwe Boll is not so much the fact that he is still making films (petition to stop him making films) but the fact that he is able to attract the money and star power to his movies. You would think that actors would be keen to avoid working with Uwe so that they don’t sign a career death note. But Til, Ron Perlman, Burt Reynolds, Jason Statham, Ray Liotta, Eric Roberts, Christian Slater, Stephen Dorff, Claire Forlani, Leelee Sobieski, John ‘Gimli’ Rys-Davies, and Ben Kingsley (although, Kingsley may be an Oscar winner, but he has appeared in some truly awful films), have all lined up to appear in a Uwe Boll production. Why!?! Rys-Davis has implied that the money is good and Uwe is easy to work for. No mention of exactly how good Uwe is to work with; I’m going to assume running hot and cold hookers and blow.

This speaks to the underlying problem with picking good entertainment. We can be easily mislead with a cool blurb, impressive trailer, a spot at the front of the store, a stand that tackles you to the ground and forces you to buy the movie/book. It is why movie stars are paid big money, because they have a brand that audiences recognise, and that can guarantee box office sales. In publishing you have name brand authors like James Patterson occupying the front of the store because they are reliable bestsellers. And Lee Child was recently shown to have the strongest brand in publishing, with fans following him from book to book more than any other author, because of his reliably entertaining books. Uwe Boll is the opposite of this brand of success and reliability.

Essentially media consumers like us are less likely to try a new author, or watch a film by a new director, or one that stars actors we haven’t heard of, because of the Uwe Boll’s of this world. We want our entertainment to be entertaining – I know, not much to ask really – and we hate being mislead by slick tricks. We see a cool poster or cover, we see a big name actor attached, or read a cool blurb, only to be sorely disappointed. So instead of trying something new, we stick with what we know and trust.

I guess that is why I promote books I’ve read and liked on this site. That is why we need people to review books, movies, TV shows and music. That is why we need to find people with similar tastes to make recommendations to us. If we can’t stop Uwe Boll making films, at least we can tell people about the films that are worth watching.

The other night I was watching the Fast and Furious 6, which is a great story about how The Rock is proving you don’t need CGI for the next Hulk movie. With the announcement and post-credits scene showing they are making Fast and Furious 7, I thought it was worth re-capping the series so far.

1) The Fast and The Furious
This first instalment is pretty much Point Break with cars.

2) 2 Fast, 2 Furious
Also known as The Curious Case of the Missing Vin Diesel.

3) The Fast and The Furious: Tokyo Drift
Who are these people? Why are they driving sideways? Where are Paul and Vin?

6) Fast and Furious 6: The Rock and some cars
The Rock dwarfs everyone on screen and no-one can see the cars clearly.

7) Fast and Furious 7: Back to Tokyo*
We quickly forget that Paul Walker has been a main cast member of the series as Jason Statham, Tony Jaa, Rhonda Rousey, Vin Diesel and The Rock beat the crap out of each other near some cars.

8) Fast and Furious 8: Reasonably Priced Car
Having realised that with all the protein and creatine the stars have been eating they can no longer afford fancy cars, Vin’s crew now rebuild some small hybrid cars to make them capable of a 20 second quarter mile.

9) Fast and Reasonably Furious 9: Repossession
Despite having downgraded to cheaper vehicles, the sheer weight of the bloated continuation of the series leads to the repo-men arriving and taking all the cars. When Vin and his crew confront the repo-men, the repo’s say “This is what we do.”

10) Fast and Not Really Furious 10: Nursing Home Drift
Now confined to wheelchairs and with rapidly deflating biceps, Vin’s crew trick out some wheelchairs and mobility scooters to pass the time between naps.

Update: According to my news feed, Paul Walker died in a car crash after a charity event at age 40. I’ve written before about Paul Walker seeming like a nice bloke who seems to have made it in films by being a decent guy and not because of acting ability. My comments above about the next Fast and Furious movie suddenly take on a new light, so I just hope the next instalment honours Paul’s involvement in the franchise (it was that initial screen chemistry between Paul and Vin that made the first movie a success). I’d already felt the franchise was drifting away from Paul as the main character, hence the joke about the massive ensemble cast above, so let’s hope they do something cool to honour him.