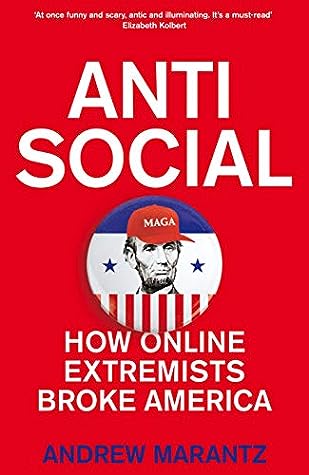 Antisocial: Online Extremists, Techno-Utopians, and the Hijacking of the American Conversation by Andrew Marantz

Techno-Utopians: Free speech for everyone!
Crazy Uncles: Let me tell you about the JQ!

Antisocial is an expansion of a series of articles Andrew Marantz wrote for the New Yorker covering the rise of social media as a news source and the right-wing extremists who used it to shift the Overton window. Marantz attempts to discuss some of the history, science, and psychology related to the way we process our news, and how that feeds into the social media experience. This, in turn, is used to show how the extremists have been able to successfully leverage social media to change the social landscape.

As I write this review, there are protests occurring across the USA in response to police violence against minorities. The police, in turn, have become violent in response to the protests, with footage of rampant assaults, documented lies, and targeting of anyone (particular the media) filming them in action. In response to this, some of the people mentioned in the book have organised their extremists to try and make the protesters look bad, with looting, provocation, and violence.

So this was a timely read. Much of the content wasn’t necessarily new to me, as I’ve read around this subject for a while now, but there were still plenty of insights to be had. This was much more in-the-trenches than other books and articles on the right-wing extremists (alt-lite, alt-right, etc), as such you see much more of the central figures. When you see videos from McInnes or Cernovich or the like, they are performing for their audience/followers, you get a much better idea of who they are when the camera is off. This makes some of the players seem reasonably relatable if still “deplorable”, like Cernovich, while others you see them as even worse than first thought, like Spencer.

There was something I noticed about everyone covered in this book. They reminded me of 14-year-olds. The guys were engaged in what amounted to oafish attention-seeking with all the intellectual sophistication of hammers. The women were doing the less macho version of attention-seeking. Yet these were predominantly people in their 30s. The behaviour they should have grown out of, particularly the trolling/bullying, had become amplified by their uniformed and racist politics.

I think the worst part of this isn’t that these people have managed to infiltrate the mainstream with their lazy politics and anti-intellectualism,* but that the social media platforms were quite happy to make money promoting them. The social media giants are presented in the book as naive and heavily pro-free speech, but I think that is too kind. To use an example, Facebook would censor any depiction of female nudity without prompting, but wouldn’t censor blatant bigotry (racism, sexism, etc) even with piles of complaints. As long as threats were veiled enough, they were fine as well. And the outrage would drive engagement and traffic, which made Facebook money, so they didn’t address the ten-tonne elephant in the room.

As I finished Antisocial, I listened to an interesting podcast called It Could Happen Here. The series is from 2019 and looks at how (primarily right-wing) extremists could set off a second civil war in the USA. Many of the points raised in the book were also mentioned in the podcast, so I recommend giving it a listen. And as I mentioned above, it’s rather timely given the protests happening at the time I’m writing this.

Worth reading if you want to know more about why you can’t have a civil conversation anymore.

* A point I should make here is that I’ve noticed some of these people have some very good points. They are anti-establishment for good reason, the establishment is for the rich and powerful, not them. Of course, they take this insight in the wrong direction. One quote really stuck out from Cernovich when he criticised the warmongering that the various politicians push for and establishment media debate, both safe in the comfort of knowing them and their families won’t be the ones dying in combat. But again, they take that insight in the wrong direction, with political positions that are essentially pro-conflict and war.

Do you have demonstrated experience in clicking Like on inane/interesting newsfeed items and well developed procrastination skills? This is an opportunity to faff about on the internet and justify Facebook’s share price. I am currently seeking applicants for an exciting opportunity to become my Facebook friend. This role could be expanded in the future to include other social media, such as Twitter and Google+, based upon the relevant qualifications and performance in the primary role.

In this newly established position, you will be joining an international team responsible for strategic reposting and Liking of science articles, social interest pieces and pictures of my children and pets.

Utilising recommended and innovative social media interaction you will play an integral role in supporting my ego, stupid social campaigns I signed and forwarded, and clickbait articles from around the internet.

Key responsibilities include:
1) Clicking Like on everything I post;
2) Sharing everything I post with your other hapless friends;
3) Establishing and maintaining relationships with people you only know via the comments on my posts;
4) Contributing to regional and internet-wide best practice outcomes for social media activities.

The successful applicant will contribute to further my social media organisational strategic goals by taking a broader view of my posts and their future directions and reassess how the delivery of social media sycophantry contributes towards that.

Preferential consideration will be given to candidates who:
1) Have met me before;
2) Whose company I actually enjoy;
3) Can write a sentence that makes sense;
4) Understand and respect restraining order guidelines.

Benefits of being my Facebook friend: In addition to the warm glow of my aura offered, other benefits include your posts being Liked, someone who will actually appreciate the distraction of your posts as a means of procrastination, and access to some of my more shady friends who can arrange body disposal. I am a progressive and innovative Facebook friend that offers family-friendly flexible Liking conditions and where personal and professional development is continuously Liked and received with “congratulations” posts.

Take advantage of this opportunity to Friend a Facebook profile that is committed to achieving a progressive, innovative and procrastinated online presence.

Also see The Bermuda Triangle of Productivity (thanks Angela!).

I read a blog post recently that suggested it is a good idea to make your email address publicly available on your webpage (and elsewhere). This is a great idea. The blog author listed 4 reasons, so I’ll list another 4.

How will SEO marketers contact you without your email?
Except via the comments and domain registry information.

Nigerian Royalty could be trying to contact you.
I hear they need to give away money to people they don’t know.

Because there is no such thing as social media and direct messaging.
I mean, who even has a Twitter, Facebook, LinkedIn, Tumblr, Google+, etc, account these days? And there are definitely no features that allow you to privately contact the person via those mediums.

I wrote a little satirical book review about a notorious science journal called Energy & Environment, which is the go-to place for people who think the Earth is flat and that climate change isn’t happening. I’ve written a few articles on the topic myself and I’m also rather active in promoting climate science and renewable energy (just read my Twitter and Facebook feeds). As a result the author of the Infographic below – Allison Lee – contacted me. So enjoy a few climate facts from the graphic below and share it to continue to raise awareness.

At the end of a day of writing you don’t feel like stabbing yourself in the eye with a pencil.

Writing can be done at any time, rather than nine till five, which is much better suited to sleeping.

Dressing for work is optional. And I mean optional.

Work shoes don’t have to have a safety rating or glossy shine, they only have to be wool lined and comfy.

If you spend all of the money your boss gives you and fail to complete your job on time, nobody is really that surprised.

All of that wasted time on the internet is “research”.

Drinking on the job is mandatory rather than discouraged.

Emailing, Facebooking, tweeting and blogging are important networking, not procrastination.

Shaving is no longer a daily chore, it is a sign you are going out in public for a change.

Work colleagues are people you only see at festivals, or chat to on Facebook when you can’t be bothered working.

The arrival of the mail is a daily highlight, rather than something you check for as you arrive home.

Some things give me paws. Their are bad examples of gammar and spelling everywhere these days. So it is time to join the fight to stop it getting badderer.

Like Loading...
Over the past week there has been a lot of noise surrounding the changes to Facebook. The big one is the change-over to timeline and, thus, the highlighting of old posts. I thought that while some of my friends are leaping off Facebook I’d like Zuckerburg and Co. to do something to entice them back.
We need some new buttons like these:

In internet terms I’m somewhat of a noob. I was late to Facebook, I held out on joining message boards and forums, I even had a personal campaign to avoid the vapidness of Twitter. Now, of course, I am happy to admit that I was wrong. Social media is awesome.

There are some down sides of course. I’m not a huge fan of the salespeople posing as real people on Twitter, Facebook, Goodreads, and the various forums I frequent. There are only so many times per day that I need to be told that my penis is not big enough, that I could be making money on Twitter by being a douche, or that someone I’ve never conversed with has a book for sale.

What I love about social media is the friends I’ve made, the great conversations I’ve had and all the catching up I’ve managed to do with friends I don’t get to see regularly. I have just joined Linkedin and discovered a friend of mine has two start up companies (check them out: http://www.cockjox.com/ http://tidyclub.com/). How would I have found that out between now and the next time we catch up for a beer?

Anyway, you can join me on the links below. We can chat, I’ll be funny, quote some science and talk books.